What These Ancient Statuettes of Obese People Say About Paleo Diets 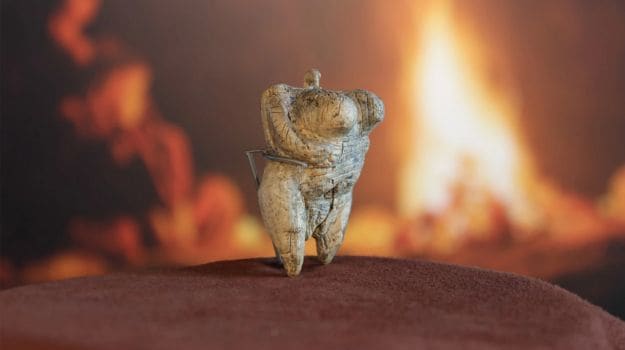 A 40,000-year-old figurine, carved from a mammoth tusk, recovered from a site in Germany. MUST CREDIT: Handout photo courtesy of the Museum of Prehistory in Blaubeuren)

The fat billows and pools around the belly button. The flesh spills over the hip bones. The thighs are fused. Long celebrated as one of the oldest known works of art, the “Venus of Willendorf,” provokes a sense of wonder: How did the Stone Age sculptor render obesity that was so life-like?

While other ancient artifacts are mere stick figures or stylized images, the Venus of Willendorf, believed to be more than 28,000 years old, gives people the sense that it was drawn from real life. So, too, do other figurines of obese women recovered from Paleolithic sites.

“She has a quite unformalized vitality,” the archaeologist and historian Nancy Sandars wrote in her book, Prehistoric Art in Europe of the Venus of Willendorf. “She does not impress us as an abstraction, an idea, or ideal of the female and the fecund; rather one feels in spite of facelessness and gross exaggeration, that this is actual woman.”

In an era when countless advocates of a “Paleo” diet argue that the Paleolithic way of life was optimized for human health, it’s worth wondering what these figurines are telling us: Could some of the “cavemen” have been fat?

The Venus of Willendorf “tells us that obesity has been a human issue for a very long time,” said George Bray, a professor emeritus at the Pennington Biomedical Research Center of Louisiana State University, an expert who has written on the topic.

“The figurines are certainly based on real life body morphology. They are anatomically accurate, and bear no resemblance to pregnant women,” said David Haslam, a British physician and chair of the National Obesity Forum, a professional organization. He has written about the artifacts. “Similar figurines exist in Malta, Israel and all over Europe, proving that obesity existed in antiquity.”

Other doctors have argued that it was highly unlikely that Paleolithic people could get fat – food was too scarce, life too demanding and besides, most did not live long enough to get the middle age spread. “Several lines of reasoning suggest that obesity must have been exceedingly rare, if it existed at all, during prehistoric times,” Eric Colman, a doctor at the FDA, wrote.

But the prevalence of obesity is largely a matter of speculation and Colman allowed, that we “cannot discount the existence of a singular case of obesity” due to disease. Haslam, likewise, suggests that Paleo obesity was “rare,” especially in contrast to the U.S. and United Kingdom today, where “it is present in epidemic proportions.”

What does seem clear, however, is that Stone Age sculptors quite often turned to depicting overweight people. A 2011 paper by a Hungarian pathologist Laszlo Jozsa looked at 97 female idols from the Upper Paleolithic and found that 24 were skinny – and mainly young and 15 were normal weight. The majority – 51 – were overweight or very obese females, however.

“The Venus of Willendorf was not unique – they’ve been found from western Europe and into Russia – it was a far-reaching phenomenon,” Bray said. “How prevalent obesity was – we have no idea. But it was there.”