Expiration Dates on Your Food Mean Nothing

Sell by, best if used by, expires on, display until; the shelf life of food seems like it’s a well regulated, concrete affair, but it’s not: It differs by region and type of food. In the end, those labels mean almost nothing, which leads to both food waste and an assumption of safety.

Where Expiration Dates Came From 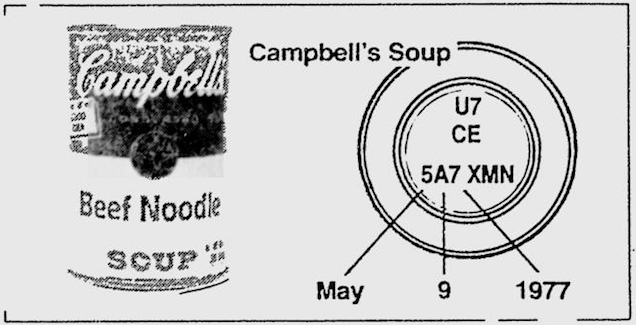 The origin of expiration dates is a classic life hack. By the 1970s, Americans had moved away from buying food from farms and small grocers and purchasing the bulk of their edibles from grocery stores. At the time, manufacturers started using special codes like the one above that told supermarkets when to rotate stock. As you’d expect, someone deciphered these codes and released a small book, called Blind Dates: How to Break the Codes on the Foods You Buy. As the name suggests, the book walked consumers through how the codes worked so they could buy the freshest food. For a taste of how it all worked back then, this article published in 1978 from the Deseret News walks you through what the process was like.

Congress introduced a few bills in the mid-’70s to regulate expiration dates, like the Open Dating Perishable Food Act of 1973 and the Fair Packaging and Labeling Act but they all failed. So, states took the issue on themselves, which is why you see certain types of expiration dates in one state but not another. States like Utah, Idaho, South Dakota, Nebraska, and a handful of others don’t require any labels at all. Other states, including California, Pennsylvania, and Virginia only require labels for milk and shellfish.

If you’re curious about just how disjointed the system is, this report from Natural Resources Defense Council (PDF) details which states require which labels. Basically, over the course of the last 40-plus years, expiration dates became a muddled mess because the requirements vary from state-to-state.

With the exception of infant formula, the federal government never stepped in to regulate expiration dates. Because of that, we have different terminology that all means different things. In most cases, those labels describe food quality and have nothing to do with food safety. As an example, let’s break down some of the most common terms:

For most packaged foods, these dates are usually left up to the food producer’s discretion. They usually work with third-party companies like The National Food Lab, who perform tests to see how long it takes food to spoil, and how shelf-stable packaged food really is.. For example, they’ll leave food out on a shelf for weeks and create a rating system to describe its quality over time. Or sometimes, it’s just a taste test. Other times, it’s more about how the food looks, and has nothing to do with taste or nutritional value. In any case, it’s not particularly scientific or indicative of the actual safety of food, and it’s all highly subjective.NPR dug into exactly how this process worked:

The experts give the food grades, in numbers. The numbers go down as the food gets older. Bread gets stale. Salad dressings can start to taste rancid.

John Ruff, president of the Institute of Food Technologists in Chicago, says the companies that sell this food take a look at those grades and decide where they will draw the line, to protect the reputation of their products.

“If the product was designed, let’s say, to be a 7 when it was fresh, you may choose that at 6.2, it’s gotten to the point where [you] don’t want it to be on the market anymore,” he says.

“If it’s 6.0, would most people still find it reasonably good? Absolutely,” he says. “But companies want people to taste their products as best they can at the optimum, because that’s how they maintain their business and their market shares.”

Which all goes to say that most expiration dates, regardless of the terminology used, are mostly about the “quality” of food, as determined by the manufacturer. They rarely have anything to do with the safety of that food or eventual spoilage.

We like to think there’s a quantifiable date that will tell us when food will go bad, but there are too many variables for something so simple. That’s the real problem with food expiration dates.

How long food sits on a truck waiting to be unloaded at a grocery store, how long it’s in your car on the drive home, how long it’s on your counter before you put it away, and more all factor into the timeline for food spoilage. It can even come down to your refrigerator’s temperature (which should be at 40 °F or below), or even where you store the food in your fridge.

More importantly though, “expired food” isn’t guaranteed to make you sick. It just means that food doesn’t taste as good. What usually makes you sick arefoodborne pathogens like Salmonella or E. coli,which can live in your food before you buy it, or even persist after you cook it if you don’t cook it properly. There’s no label or timeline that guarantees your food is free from bacteria that may make you sick. Bacterial growth is time and temperature dependent, so proper food handling is more important than a printed date. This is also why food tends to last longer in the freezer than it does in your fridge—the freezer may not kill all bacteria, but it does slow them down a bit, and halts bacterial growth. Either way, spoiled food might taste gross (and there’s no reason to eat it if you don’t have to,) but that alone doesn’t make it unsafe to eat.

What To Do Instead of Relying On Expiration Dates

So, if the dates are mostly arbitrary, what can you do? Well, the sniff test is still your best option. If it smells bad, it’ll taste bad. Your eyes can also tell you a lot. If food looks spoiled, it probably is. Likewise, certain meats, like chicken, tend to get a slimy texture and dull color when they spoil. We all have the innate ability to tell when food is appetizing or pungent and rotten. Trust your senses.

Beyond that, there are some other basic guidelines that can help. The USDA’s chart above is a helpful starting guide. If you want to want to dig into the longevity of specific packaged and opened foods, sites like StillTasty and Eat By Date feature tons of tips about how long food tends to last in the fridge or frozen. More importantly, both sites give you tips on identifying when food spoils, so it’s useful when you’re doing the sniff test and you’re not sure if what you smell is as bad as it seems.

Finally, your best bet is to store your food properly so it actually lasts as long as it’s supposed to. When food’s mishandled, say, by defrosting frozen chicken wings at room temperature for six hours, that alters the safety more than anything else, so make sure you follow the basic rules for defrosting. Keep a sharp eye for mold or other signs of spoilage, and cook your food thoroughly and properly to avoid contamination.

The fact is, the expiration dates, regardless of the language they use, mean little. While they’re worth a glance when you’re standing in the grocery store, they’re worthless beyond that point, and certainly not worth the faith most of us put in them. We can do much better with our eyes and noses.