Paleo-Indians arrived in Scarborough 11,000 years ago 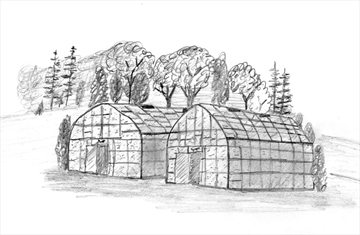 The first people to live in the Americas arrived about 16,000 years ago during the late Pleistocene period.

These Paleo-Indians followed large prey, such as mastodon and giant bison, across the Bering Land Bridge from Asia and travelled down the west coast of North America. Some continued south while others travelled east, eventually arriving in southern Ontario around 11,000 years ago, where some used the Humber, Don and Rouge Rivers to travel between lakes Simcoe and Ontario along the route that became known as the Toronto Carrying Place.

Archaeological sites, including some from pre-European contact, were discovered in the Rouge Valley. One, located in northeast Scarborough, was 70 m from the Little Rouge River, in an area now called Woodland Park. The aboriginals lived in family groups, which moved from time to time. Since populations were small and land abundant, these groups had limited friction or wars between them.

Hunting was good and the nearby Rouge had abundant fish.

Evidence of two longhouses was discovered here. Fixed poles in the ground were bent at the top and joined in the middle forming an arch. The arches were covered on the sides with bark and the roofs with hides. The longhouses had one or two hearths. In the warmer months, a hearth outside was used for cooking.

Remains of pottery, flint tools, worked bones, arrowheads, beads and pipes were discovered at this site. The majority of the pottery came from the Late Woodland stage between 500 to 1600 A.D. Large numbers of flint chips indicated a great deal of work occurred on this site. Animal remains included canine, grey fox, deer, bear, swan, goose as well as sucker, salmon and catfish. One catfish weighed in around 100 pounds.

Sleeping in the longhouse was comfortable during the summer, but in the bitter cold of winter it was horrible, as the smoke could not escape easily and filled the longhouse, stinging eyes and making breathing difficult.

Aboriginal inhabitants were accustomed to the atmosphere but, when sleeping, many would get close to the ground for a better breath. Later European visitors described the smoke in the longhouses as unbearable.

The families who lived here eventually moved on, possibly to one of the larger villages which were forming at this time. One of these is Beade Hill, located near the mouth of the Rouge River.